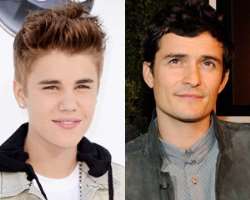 The 37-year-old hunk was allegedly refused entry into the birthday bash for Givenchy fashion designer Riccardo Tisci after the 20-year-old singer ordered his entourage to stop him from entering the celebration.

An insider told the New York Post's Page Six column: “Bloom was on the way as a late arrival, but when he got to the starry bash, Bieber, who was already inside, had his entourage insist organisers keep Bloom out.”

The Baby  hitmaker then continued to party inside the Spanish venue along with Kim Kardashian, Kanye West, Kendall Jenner, Jared Leto and Kate Moss, while Orlando was forced to leave the area.

The snub follows an altercation involving the Lord of the Rings  actor and Justin at the upmarket eatery Cipriani earlier this week.

Orlando reportedly swung a punch at the troubled star – who was rumoured to have slept with his then-wife Miranda Kerr almost two years ago – after Justin reportedly told him, “Say hi to Miranda for me.”

Miranda's lawyer previously insisted that rumours she cheated on Orlando, with whom she has three-year-old son Flynn, with Justin after the Victoria's Secret fashion show in 2012 were “false and defamatory”.