‘Happy Birthday To My Amazing Boyfriend’—Tania To Wizkid 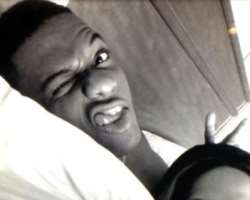 Today, Wednesday, July 16, is the birthday of music artiste, Wizkid, who clocks 24. Already, the award-winning singer has been getting messages from his fans and colleagues too.

One person that is not left out is his Tania Omotayo, who was once reported to have broken up with Wizkid, but later said to have returned to him after some months apart.

The pretty lady shared bedroom photos of her with Wizkid and added a romantic message to it, also indicating that they are still in love.

'I love you more than I can possibly put into words,' she confessed and further stated that, 'happy birthday to my amazing boyfriend.'

Her posts suggest that they are back together for good. Few months ago, Wizkid sent Tania birthday gifts and wishes.

There is No Document That I Was Deported..Apostle Helen Ukpabio

'I Have Common Sense and Knowledge....2face Idibia