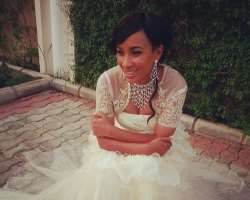 Nollywoodgists.com can confirm that President of the Actors Guild of Nigeria (AGN), Ibinabo Fibersima is set to marry her lover. The former beauty queen and ex-lover of Fred Amata will say 'I do' to her heartthrob in December 2014.

The ceremony, we learnt, will hold in Port Harcourt, Rivers State.

It was gathered that the man Ibinabo has decided to spend the rest of her life with proposed to her over the weekend in the United Kingdom.

When contacted by Nollywoodgists.com, she confirmed to us that she will wed in December, but declined to disclose the identity of the man. This is going to be her first marriage.