FRUITFUL AND MULTIPLYING WITH THE VATICAN'S BLESSING 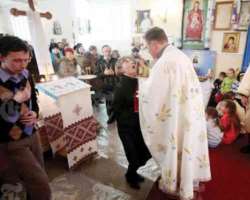 By Clifford J. Levy
March 24, 2010 02:21AM
Let the rest of Europe be convulsed by debates over whether the celibacy of Roman Catholic priests is causing sex abuse scandals like the one now unfolding in Germany. Here in western Ukraine, many Catholic priests are married, fruitful and multiplying – with the Vatican's blessing.

The many feet scampering around the Volovetskiy home are testament to that.

The family's six children range from Pavlina, 21, to Taras, 9. In the middle is Roman, 16, who wants to be a Catholic priest when he grows up. Just like his father.

Dad is a priest
Dad is the Rev. Yuriy Volovetskiy, who leads a small parish here and whose wife, Vera, teaches religious school. The Volovetskiys serve in the Ukrainian Greek Catholic Church, which believes that celibate priests are not necessarily better priests.

Ukrainian Greek Catholics represent a branch of Catholicism that is distinct from the far more prevalent Roman Catholic one. The Ukrainian church is loyal to the pope in Rome, and its leader is a cardinal and major archbishop.

But it conducts services that resemble those in Eastern Orthodox Christianity. In religious terms, it follows the Eastern Rite, not the Latin one that is customary in Roman Catholicism.

Historically, the Vatican appears to have tolerated the traditions and attitude toward celibacy of the so-called Eastern Rite Catholics in order to retain a foothold in regions where Orthodox Christianity has dominated. But this exception suggests that the Vatican view on celibacy is not as rigid or monolithic as it might otherwise appear.

And so home life with the Volovetskiys offers this portrait: a father who is a Father, wearing a Catholic clerical collar, doting on his children like any other parent, even organising an impromptu family musical recital. ('I will sing for you!' said Irena, 13, while she plucked the strings of the bandura, the Ukrainian national instrument).

Loyal but different
Ukrainian priests, while reluctant to criticise Pope Benedict XVI over his unyielding stance on the celibacy requirement, said permitting them to raise families enriched their ability to tend to parishioners' needs.

'It is important when a priest has an understanding of not only himself,' said Volovetskiy, 45, who entered a seminary when he was in his 20s. 'Having a family gives a priest a deeper understanding of how to relate to other people and help other people. It is more natural, it makes more sense, for a priest to have a wife and children.'

The Rev. Roman Kravchyk, 50, a senior Ukrainian Greek Catholic official, said he was often asked by seminary students whether they should try to have a family or remain celibate (sexual relations outside marriage are not an option). He said he did not strongly encourage either, though he pointed out the advantages of marriage.

'It seems to me that when a priest is not married, it is difficult for him to explain things to parishioners,' Kravchyk said. 'Because he has not lived through them.'

He added that celibacy would seem to go against human nature. 'Having a sexual life, no one can escape that,' he said. 'We are all living people. We are not stones. Though there have to be limits.' Kravchyk and Volovetskiy, who were interviewed here in western Ukraine before the scandal broke out in Germany this month, declined to address the issue of whether sexual abuse by priests was connected to celibacy.

The Vatican has rejected such a link. Senior church officials have said that if celibacy was the cause of these scandals, then there would not be problems of child sex abuse outside the priesthood. Still, whether or not a link exists, publicity about the German cases has touched off a renewed debate over the issue.

The Ukrainian Greek Catholic Church, which has roughly 5 million adherents in Ukraine, is one of a small number of Eastern Rite Catholic churches. Others also recognise the pope's leadership and permit married priests. These churches account for only about 1 or 2 percent of all Catholics.

The Ukrainian Greek Catholic leader, Cardinal Lubomyr Husar, is celibate, as is typical among the leadership of Eastern Rite Catholic churches. The cardinal has not spoken out in recent days on the issue of celibacy, though he has said that he does not think that ending the requirement would help the Vatican confront the declining number of men who want to become priests.

But Cardinal Christoph Schoenborn, the Roman Catholic Archbishop of Vienna, suggested this month that in response to the German abuse scandal, the Vatican should question its policies, including celibacy. His spokesman later clarified that Schoenborn was not calling for abolishing the requirement.

The children and the calling Here in Rudno, a suburb of Lviv, the largest city in western Ukraine, Volovetskiy has a small church, St. Volodymyr the Great, that hints at a melding of Eastern Orthodoxy and Roman Catholicism. Inside, there are depictions of Jesus Christ similar to those seen on Russian icons, as well as photos of Pope John Paul II.

Part of society
At his home the other day, it was clear how Volovetskiy's life diverged from that of a Roman Catholic priest. Volovetskiy's wife, Vera, 44, was teaching religious school on the first floor to 20 or so young children, including their youngest, Taras.

Upstairs, Pavlina, their eldest, who is studying to be an archivist and a religious school teacher, was making lunch. The others, including Yuriy, 18, and Khrystyna, 10, showed off the house. On one wall was an old wedding photo – Volovetskiy carrying his bride, Vera Volovetskiy.

The children said they were proud that their father was a priest, though they acknowledged that it was a challenge always having to set an example.

'People may not know you well, but they know who your father is, and they are watching you in the street and in the school,' said Roman, the 16-year-old. 'It's a little like being a target.' Volovetskiy said having children changed how he approached his calling.

'It helps me to view the world through the eyes of others,' he said. 'And it helps people trust me more. They see that there is a priest who has a family, and they see how we live. We are part of society.'