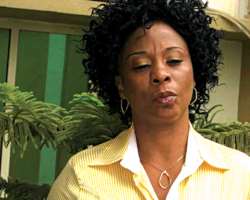 AS Nollywood actress and popular television hostess, Tricia Esiegbe, now Tricia Kingsley Kerry, sauntered into the room, where the organisers of a new reality television show, Street Champz, were performing a special media unveiling ceremony, all eyes turned on her. It was her first major outing since her marriage. Moviedom had a chat with her after the ceremony.

Congratulations on your wedding
Thank you very much. I want to also thank God because it was a day I wished for in my life. At a particular point in a woman's life, she wants to settle down, otherwise, it becomes a problem, especially when the age is almost on the older side. I want to thank God again for His favour. It came at a time I did not expect. Before I got married, things were a bit shaky because there were a couple of stories making the rounds about marriage break-ups and what have you. I became scared and prayed never to have such experience.

Now with marriage, will you still do your stuff?
My husband is different, he is very unique in his own way. He told me even before we got married that I should not be scared because nothing will change except my name. He assured that I was still going to be the Tricia people knew and that it would not affect my business. He said the marriage would even enhance my business, because he is a trained motion picture director. So far, he has put all that to test on my programme Bold Faces and we have been receiving lots of calls from African Magic and outside the country. He got all the software and background to build Bold Faces to the level it is today.

Marriage is good, but love first
It is safe to marry someone in your line of business if the love is there. Not love based on popularity, fame and wealth, but unconditional love. It should be love for who you are and not what you are. People are always afraid of marring people in the entertainment industry because they feel they are prone to all kinds of immorality. However, one has to pray to God for a decent, God fearing and homely husband. My husband is one of such.

When will you appear on screen?
Very soon! We are coming out with some new television shows, which will equally be shown abroad. We are talking to African Magic on some of them. We are also going to be doing home movies and television soaps. My husband wanted me to act in one of them to cut cost. Since he is comfortable with that, who am I to say no? Acting for me is a passion. I am not into kiss-kiss type of acting, which of course, he knows. But even at that, my husband is not that kind of person. He is just God sent.

And Bold Faces?
Already, the programme has gone international. We are all over the stations in Nigeria. We are also in Europe. We have moved up in terms of technical details. It is now different from what you are used to. We will in no distant future spread to other continents of the world.

Maryam Babaginda
I cried when Maryam Babaginda died. It was a big loss to me. She was a mother and motivator to me. She gave a lot of mileage to my show. The interview I had with her would remain evergreen. Her death would also rank as one of the saddest moments of my life.

Regrets
None for now. If I have opportunity of living my life again, I will still be an entertainer. The only thing I don't like about the industry is the publicity — you see people writing what is not true about you just to sell their papers; some even plant negative stories in the media to run people down. I have had doses of it. It was once rumoured that I dated a footballer, which was nothing, but falsehood. I have never dated a single footballer in my life. Because these people are difficult to get on set, people just conclude that to get them you must be dating one. But that is not correct. I am happy that God has elevated me. I have even gone past African footballer. I now talk to big time footballers in Europe. Will they say I am dating the foreign footballers such as David James, too?

Street Champz
This is a reality television show being put together by a team of credible people from the United Kingdom and, my husband, Kerry, happens to be one of the directors. He is also the operations and technical director of the show. Though based in London, the team will be coming to Nigeria to discover talents on our streets. One thing that makes the show different from other is the four-art category they talked about. There is a music, drama, comedy and dance part of it. I think this is quite different considering the background of those behind it.