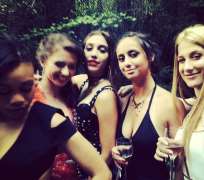 Lourdes Leon and friends head to the prom (Instagram)

Kids… they grow up so fast.
Madonna posted a photo of her 17-year-old daughter over the weekend enjoying a pre-game of sorts before her high school prom.

“Pre prom turn up ! #yaaaaaassssssbitch,” Madge captioned the above photo on Instagram . Lourdes looked like a relaxed, glamorous Queen Bee sandwiched in between her girlfriends, who appear to be sharing a toast in the snapshot.

Lourdes will graduate from Fiorello H. LaGuardia High School of Music & Art and Performing Arts in NYC this month and she recently reflected upon the life transition.

“So many things that have been a part of my everyday routine for the past four years now suddenly aren't and it's weird because so much more lies ahead — yet it feels almost empty to wrap up high school,” she wrote on her blog . “Of course I'll miss the friends that I've made and the family that makes up the drama department, but it's really beautiful to be able to see all of the people I dearly love and care for, people that I grew up with for four years, go on and pursue their passions, whatever they may be, and find their place.

“Oh how I wish I could go back in time and urge my 14 year old self NOT to wear black rhinestone studded t-shirts with bloody skulls on them, purchased from really 'hip' stores (wtf is hip anyways),” she continued. “I like to reassure myself though, that I had to go through that awkward time of 'trying stuff out' to figure out what I liked wearing best.”

For prom, the Material Girl's daughter sported a polka dot dress and tall black heels along with a blond streak in her brunette tresses.

Last week, Lourdes was spotted grabbing dinner in New York City with Madonna and her father, Carlos Leon, at Beauty & Essex. “They were all having a blast,” a source told Yahoo. “Laughing, joking, and they definitely seemed to be enjoying each other's company.”

As for what's next for Lourdes, it has not yet been revealed where she will go to college. However, Madonna and her mini me were spotted visiting the University of Michigan last fall. The Queen of Pop attended the school for two years on a dance scholarship and told the NFL Network in 2012 before her Super Bowl XLVI halftime performance that she wants her daughter to become a Wolverine: “I keep telling her, Ann Arbor is an awesome place.”