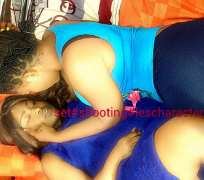 Nollywood actress, Halima Abubakar, may have decided to dish it out hot to anybody who decides to criticize her this time around in any form.

The budding actress, who has recently been constant on the social media, is on the watch out of anyone who will throw stones at her as recently her post on instagram was misinterpreted.

Halima posted a cut from a movie set where she was acting the role of a lesbian on her instagram page and captioned it 'I shot dz scene today. was abit skeptical till I read d script and it is an eye opener. I love challenging roles. You will like it lesson to be learnt #estateruns #movie.'

Few minutes after sharing the pic, some fans came after her and challenged her with counter-comments.

Some of the comments pissed her off and she deleted them before slamming the fans right back.

As if the issue was going to end, Perrythelma replied her by letting Halima know that she meant no harm to her personality. This time around, she was calm as she did not delete the post.

Perrythelma This is what causes problem in Africa most especially in Nigeria, u guys take an advice for a curse, and besides I ain't condemning her, I only said it wasn't cool to post it and she said it just a movie so what's the big issh here? @lovelyvivianrowland

Perrythelma My dear sorry if you misunderstood me, I ain't condemning you, I love your kind and movies kip it up @halimabubakar