Rivers APC Calls for the Arrest of Jerry Needam 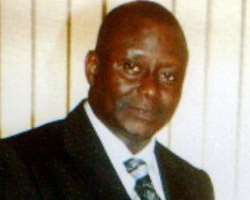 The Rivers State Chapter of All Progressives Congress APC, has called for the arrest of Mr. Jerry Needam, Spokesperson of Mr. Felix Obuah and Rivers State Chairman of the Peoples Democratic Party for alleging that Governor Chibuike Amaechi was the brain behind the current influx of the suspected terrorists to the Southern part of Nigeria.

According to Mr. Needam in a statement issued in Port Harcourt on 18thJune, 2014, 'Rotimi Amaechi is responsible for the recent mass influx of suspected Boko Haram members into South-Southern and South-Eastern states of Nigeria.'

APC in a press release said: 'To us, this is a very grave allegation that requires the immediate attention of the security agencies so as to prevent the menace of Boko Haram spreading to the South, having seen the damage the sect has caused to the security and economy of Northern Nigeria. Mr. Needam should help security agencies with further information on how Governor Amaechi sponsored the movement of these suspected agents of destruction down to the South because to us, Governor Amaechi is a fighter against insecurity and not a promoter of insecurity as painted by the demented Aide to the PDP State Chairman. If he fails to do so, he should be cautioned accordingly to avoid such charlatans from doing much damage to the peace of our nation.

'Boko Haram is not something to be joked with. It is a serious issue that should not be frivolously used to tarnish the image of political opponents. For Mr. Needam to accuse a Governor who has been doing his best to sustain the peace in his state since assumption of office in 2007 - rescuing Rivers State from the menace of militants and even ordering two helicopters to assist security agencies in securing our State - of sponsoring the influx of miscreants to the Southern part of Nigeria in order to cause mayhem is very unfortunate.

'It is on record that Governor Amaechi was recently awarded the Best Governor on Security in Nigeria by the Nigeria Security Profile Award (NISPA). For Mr. Needam to turn round to accuse the same man of promoting insecurity simply demonstrates how empty he and those he is working for are. The security agencies should arrest and get him to substantiate his bogus allegation. Anything short of this would encourage charlatans like him further heat up the polity by making unguarded and frivolous allegations aimed to demonise innocent public officers', Rivers APC concluded.