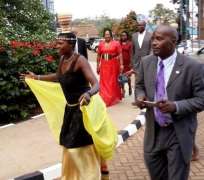 Veteran Nollywood actress, Patience Ozokwo aka Mama G, has indeed made her mark in the film industry in Africa. Most up and coming stars see her as a role model. She is also respected by big players in the movie industry.

The actress, through her entertaining skills in the make-believe world, has been able to help position the Nigerian entertainment industry to a high standard to be reckoned with in the diaspora.

Mama G was spotted in Uganda at the launch of the second edition of the Uganda Film Festival on Tuesday, June 17, 2014.

The second edition of the Uganda Film Festival which has its theme; 'Empowering Ugandans Through Film,' is expected to take place between August 25, 2014 and August 29, 2014.

The 2014 AMAA Best supporting actress was welcomed with cultural troupes before addressing the movie practitioners in Uganda and thereafter launched the 'Mama G Star' at the Serena Hotels, which is regarded as one of the best hotels in Uganda. Gloves off: What Do The Igbo's Want?

My Face Scrares Ladies Away And Still Brings Them Closer.DJ Sose

Ibinabo Should Be Left Alone'- Jide Kosoko Voices Out

Photos: What Is John Dumelo Doing To Yvonne Nelson