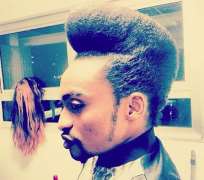 Denrele has shared lots of pictures of him at various locations expressing his happiness for his vast growth in the industry and a life worth thanking God for.

Denrele was born in Hamburg, Germany to a Yoruba father and an Indian-Mauritius mother. He is the only son and has two sisters. He grew up in Germany and came to Nigeria when he was five where he attended St Gregory's College, Ikoyi and the University of Lagos.

Denrele is known for his unique fashion style and personality. He started his television career as an actor at eleven when he played a presenter/producer on Kiddievision 101 on NTA Network. As an undergraduate at the University of Lagos he went into modelling, and after graduation, he joined Sound City as a TV presenter.