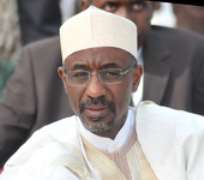 (AFP) â€' Nigeria's ruling party has been given another headache in the run-up to next year's general election, with the appointment of the former central bank governor to an influential religious post.

Sanusi Lamido Sanusi was named Emir of Kano on Sunday, making him the second most-powerful Islamic leader in the country and giving him immediate influence across the Muslim-majority north.

But with Sanusi's background and the allegiances of the Kano state governor who approved his appointment, domestic politics and jockeying for position before next year's vote have been suspected.

Dapo Thomas, a political scientist at Lagos state university, said Sanusi, as a grandson of a former emir and member of a ruling house in the northern state, had all the right credentials to win.

Kano state governor Rabiu Kwankwaso was also within his rights to approve the recommendation of four royal 'kingmakers', who met in private to discuss the succession after the late emir's death on Friday, he said.

But he added: 'Although, he is supposed to be apolitical, Sanusi's choice may indirectly affect the political fortunes of the ruling Peoples Democratic Party (PDP) and President Goodluck Jonathan, given the frosty relationship between them,' he said.

'Sanusi was sacked as CBN (Central Bank of Nigeria) governor and I am not sure he can easily forgive Jonathan and his party for that.

'As a traditional and religious leader, an emir wields a lot of influence among the people and this may not augur well for the president and the PDP,' he told AFP.

- Political background -
The PDP's fortunes in northern Nigeria had taken a nosedive even before last weekend's events.

Jonathan and his party saw a wave of defections of influential state governors to the main opposition All Progressives Congress (APC) late last year.

Most of them were from the north and Kwankwaso was among them.

That, and the switch in sides of a number of PDP lawmakers, eroded Jonathan's power base and parliamentary majority, strengthening the APC's hand as it looks set to win the presidency for the first time.

High-profile Sanusi, who is credited with turning round the fortunes of Nigeria's banking sector, was suspended from his post in February after alleging corruption at the heart of government.

The government's claim of misconduct and financial recklessness against Sanusi was seen as politically motivated.

Jonathan was quick to express his condolences to the late emir on Friday. But he has yet to formally congratulate Sanusi.

His party even issued a premature statement of congratulations to the late emir's son on Sunday before hastily withdrawing it. The PDP was alleged to have backed his candidacy and the APC, Sanusi's.

- A question of pride? -
The PDP and the APC traded insults on Monday after the opposition accused the ruling party of inciting the violence that erupted on the streets of Kano in the wake of Sanusi's appointment.

How Jonathan responds is still key, with a snub to Sanusi likely to widen the gulf between the PDP and the electorate in the north.

Nigeria's traditional leaders, including the emir, have few constitutional powers but wield great influence as custodians of both religion and tradition.

An unnamed source close to Kwankwaso was quoted as saying by the Leadership newspaper on Monday that the governor's decision was based on the principle of 'my enemy's enemy is my friend'.

'Where will the president go now in Kano? Will he now come to Kano and bow to a man he suspended from his job for doing the right thing?' the source added.

'And what will happen to all the court cases against him? You can't drag the Emir of Kano to court.'

Thomas and Debo Adeniran, from the Coalition Against Corrupt Leaders pressure group, however, said the onus should not all be on Jonathan to build bridges.

Sanusi should also put their differences aside, they said.

The new emir has a responsibility to help tackle the increasingly violent insurgency by Boko Haram militants across Nigeria's north and there was a bigger picture to consider.

'His (Sanusi's) selection should not be politicised because he is now the father of all,' said Adeniran.

'It's customary and traditional that the president should pay him homage in Kano as the institution he represents is non-partisan.'