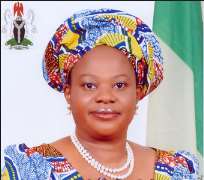 Governor Theodore Orji of Abia State has condoled with the Akunyili family, the Government and people of Anambra State on the untimely demise of the former Minister of Information, Prof. Dora Akunyili, who passed on last weekend at the age of 59 years.

In a statement by his Chief Press Secretary, Mr. Charles Ajunwa, Governor Orji who expressed shock and sorrow on the death of the one-time boss of the National Agency for Food and Drug Administration and Control (NAFDAC) and described her death as a great loss to the nation.

He noted that during her life time the late Prof. Akunyili was a dogged, dedicated and patriotic woman who discharged her duties with great zeal and lamented that her absence will be felt by her state, south east and the nation at large.