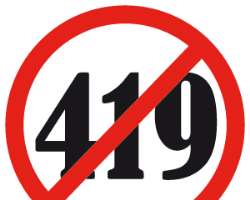 Scampering through the cyberspace, at a wastes dump junction along the social media boulevard of the Nigerian 'cyberia', I stumbled on a post about the Will Ferguson's Giller Prize-winning novel - 419. Like the relentless armies unleashed into the cyberspace by the current Nigerian misruling elites, I also take a break from my usual manioc cultivation preoccupation to pry into the world of the internet to feed my curiosity on the myriads of posts emanating from Nigeria and about Nigeria.

You will wonder why a mere manioc farmer is keen on exploring the internet, not in search of the new cassava variety released by the International Institute of Tropical Agriculture (IITA) or the next major point of cassava demand, in terms of the thriving flour milling factories venturing into the uncharted territory of cassava flour for bread and other confectioneries. Wonder not further. I have gotten beaten by a particular bug which secreted into me an unquenchable and perplexing preoccupation about Nigeria. What is it about this mammoth and complex giant of a nation call Nigeria? It is an unexplainable love.

More so, like the many unfathomable mysteries of Nigeria Ferguson attempted to unravel in his novel, I have always wondered why an entity with so much obvious potential keeps defiling basic expectations, intermittently raising the hopes of her admirers and dashing those hopes periodically. That has been the sequence about Nigeria from the pre-independence years.

Before I go further, it is worth affirming that Nigeria and all that it has come to be identified with, including 419 and corruption, have become a metaphor for Nigeria and Nigerians. Reading through Ferguson's novel, which he chose to call a work of fiction, I am marveled at the level at which the work of fiction perfectly depicts the Nigerian situations, the disheveling realities even the sceneries. As the novel unfold the plots about the lives of the key characters, he takes the reader on the journey exploring the Nigerian landscape - a vivid and nearly accurate depiction of land, the people, their cultures, their dreams, their desperation and damnations, as captured by the fate that befell Nnamdi and other characters in the novel.

I contest the novel should not be categorize as a work of fiction, but rather an illustrative novel about Nigeria. 419 in the Nigerian sense is not a fiction. 419 is not an illusory metaphor, but rather a metaphor for the realities about Nigeria and Nigerians. Nigerians themselves, particularly those from the ethnic stocks southeast of the Niger River have overwhelmingly referred to the country as a British 419, a British scam, a collection of diverse peoples and cultures forcefully wedged together to feed the greed of the colonial masters and rampaging business interest from across Europe, represented by the Niger Company.

As depicted and detailed in the novel, lives touched, changed, transformed or damned by 419 are no fictions. The 419 scam has been a come-up, albeit unsustainable and dripping with bloods and shame for many Nigerian youths who have evolved different rationalizations for perpetuating the advance fee frauds and other assortments of scams. These rationalizations for continuing on this damning path is captured in the novel as the introductory conversations between Winston and Ironsi-Egobia are told. The excuses of the youths who are still laboring away, wasting productive work hours scanning the internet for the next mugu or maga are not too different from those rendered by the 419 kingpin.

From the start of the novel to the end, the various turn of the lives of the characters: dreams, fortunes and misfortunes is of Nigeria as a country, Nigerians as a diverse ethnics peoples, and the observing outer world, or the international communities keenly observing and gauging the steps and missteps of a nation birthed with huge promises.

I read the 419 novel in exhilaration, not as a work of fiction, but as an essential guide to the Nigerian soul. Like I mentioned earlier, the 419 novel is a vivid and nearly accurate depiction of Nigeria and her realities. The stories of the lives of the characters are lived daily by millions of Nigerians. Amina running from the Sahel and it sands, pregnant which dreams and expectations whose outcomes turned out to be near or total gloom rather than 'sunlight on silver' is the fate of many Nigerians. Like Amina, Nigerians are still running from their shadows, chasing fortunes into unknown lands.

Like Igbo Joe, whose presence in the novel was for a while, despite the exploits, conquests and coming to sudden riches, the fates of many Nigerians are not too different. This is what happens when chaos yield fortunes. The raging wings of chaos always dissipate whatever poorly founded fortune a man may have come by. Like the mists formed from a light showers of rain on a sunny day.

Ironsi-Egobia is a perfect depiction of the misruling elites. Many who have journeyed through poverty to come to affluence and immeasurable influence, carry-on, ignoring the red flags, even those telling of their not too distant damnations? Rather than take on the many opportunities to make a detour and change the story of their fetid domain, they plough on rolling more heads on a one-way drive to perdition. Those they are not able to kill on their self-destruct voyage, they keep in perpetual fear. That is the fate of Winston. That is the fate of Nnamdi. The Nigerian reality does not condone pacific temperament. To ride the Nigerian horse through the unpredictable Nigerian terrain, you must be ruthless, dispelling favors and dealing horrid fates to many as you so fancy.

419: a novel is a Nigerian metaphor, a realistic one. I am amazed that the current governments, particularly at the federal level picked no fight with Ferguson on this tell it all rendition of the Nigerian tragicomedy story. Nigerians and their governments rather than take up the challenge of a not too sweet reportage, go for the kill and on many occasions directing tantrums in the direction of the source of such foul reportage. It has happened severally in time past. It happened with the BBC welcome to Lagos. It just happened with the movie adaptation of the half of the yellow sun. It is for the same purpose of throwing tantrums that the many relentless armies of youths have been unleashed on the cyberspace by the misruling governments across Nigeria. If you need to know what bites at the heart of Nigerian governments, take a stroll on the social-media boulevard of the Nigerian 'cyberia'. I for one have identified as many wastes dumps on this boulevard where vultures and scavengers congregate. Never mind, there is no law enforcement agent on the prow to instill any semblance of order.

If you are like me, with the cupid arrow for an eternal love for Nigeria struck deep into your heart, the 419 novel should be your study companion. If you are like Laura Curtis in the novel driven by humane passion for a lost Amina and her son, and this reflects the international community and external concerns, once injured by Nigeria and Nigerians, 419 provides a unique study and useful story into the Nigerian soul. For many in the shades of Winston and officer Ribadu in the hot or lazy pursuit of dreams or duties, I recommend 419 for repose and inspiration.

Taofeek Ramat is a cassava farmer who has never tasted cassava bread.

Disclaimer: "The views/contents expressed in this article are the sole responsibility of the author(s) and do not necessarily reflect those of The Nigerian Voice. The Nigerian Voice will not be responsible or liable for any inaccurate or incorrect statements contained in this article."
Articles by Taofeek Ramat
6-2-2014  Apc Membership Registration Drive: The Preparation For Scientific Rigging30-4-2013  What Became Of Our Diligent Researches And Rigorous Thoughts – Dr Goodluck Jonathan?4-4-2013  Help!!! They Are Killing The Little Men11-3-2013  Saving Nigeria: Are Nigerians Ready?21-2-2013  The Grey Matter Does MattersMore...