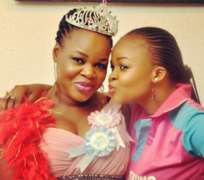 After crying for help over one of her tenants who has been giving her sleepless night, actress Cossy Orjiakor may have finally decided to take her case on the social media since the Nigerian police are not doing anything to salvage her complains.

Recently, the actress complained about her tenant who has been owing her some rents allowance which he refused to pay.

She complained that this tenant threatened her after his rents was overdue and refused to move out. Adding that she was slapped by his group member two days back.

Cossy who could not hide her fears, took to the social media to express her fears stating that incase anything happen to her, the dude in question by name Akapo Olushola Gerrard, and the wife Uju akapo, should be held responsible.

The actress regretted not placing her house in the care of an agent and as such, called on Nigerians to come to her rescue. I can't run from my home because he is in Aye fraternity. Almost all the young boys here have been intimidated to joined this group, she laments.