Dakore Egbuson Steps Out After Childbirth 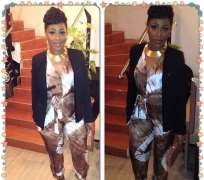 Barely three months after Dakore Egbuson-Akande gave birth to her second child, she has stepped out and her post baby body is unbelievable.

The Nigerian actress attended the Oju Africa's first Afro Emoticons launch, which took place at Miliki, Victoria Island area of Lagos state, in a stunning Batik (Tie & dye) jumpsuit with a black blazer (Jacket) over it. She styled her lovely outfit with a bold statement neckpiece in gold, lovely brown clutch-purse and a pair of stud earrings.

She completed her look with a flawless smokey makeup with nude lips and a twisted hair updo.

With 'Oju literally meaning 'Face' in the Yoruba language, the Oju emoticons aims at sharing African soul, funk and unparalleled smiles with the world. The Afro emoticons have been designed to be used across all Android platforms.