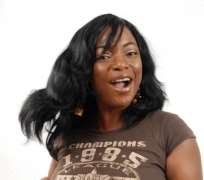 Nollywood actress, Bimbo Akintola, has cleared the air about her relationship with Afrobeat mystro Dede Mabiaku, stating that it did not cause her career downturn.

The actress stated that whatever happened in the relationship was not Dede's fault, as he has always been a good person.

She said that Dede was a good person but Nigerians just love to blame him for things because of his “bad boy image” being an Afrobeat musician.

Bimbo admitted that she was in a relationship but maintained that she would not be coerced into marriage as it was an important aspect of human life that she could not afford to rush.

She refused to disclose the identity of the man in her life or her marriage plans.