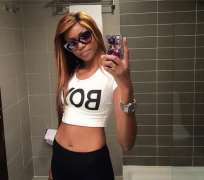 Controversial Ghanaian actress, Yvonne Nelson recently traveled to Spain. Yvonne has been in the news lately for controversial reasons.

Recall that some months ago, she was reportedly dumped by Nigerian singer, Iyanya, who even did a song where he expressed how potent Yvonne Nelson's 'medicine is, ostensibly her 'waist'.

Also, the actress was accused of changing her skin colour with a bleaching cream, an allegation Yvonne has vehemently denied.

Yvonne Nelson was in Madrid, the Spanish capital last weekend and she stated that the streets of Madrid was agog after Real Madrid clinched their historic 10th Champions League trophy against their city rivals, Atletico Madrid in a 4-1 thriller match.

It is, however, not clear if Yvonne traveled to Spain on vacation or for business. But from the look of things, the actress is still enjoying her singlehood and ready to catch fun.