If A Movie Requires Me To Be Skimpy, Why Not–Halima Abubakar 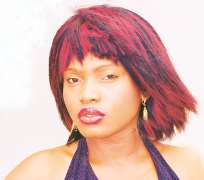 Halima Abubakar started out as a teenager in the movie world but has been able to leave her footprints on the sands of Nollywood time.

This Kogi indigene, who was born in Kano, maintains that she is now more focused and mature as to take on bigger and better challenges in the world of make believe.

In a chat with Klieglights recently, Halima, whose roles in Nollywood flicks have left her a subject of discourse anytime she walks past, talked about her intentions and challenges ahead.

“Halima is a girl with human sympathy and lots of love to give, that is how I would simply describe myself. I'm now100 per cent more focused and mature. This girl is not playing at all, I'm all grown now and I'm still growing everyday and learning also. So, the sky is my limit,” she began.

“Every movie has a story and if it requires a little bit of (going) skimpy in it, well it's just a movie. And I have never done or acted in a nude movie before in my life. However, that is in the past. I no longer dress carelessly like before,” she dropped on her reason for acting the controversial roles and appearing skimpily dressed in movie scenes.

Contrary to the belief that Halima is all about flaunting her bodily assets, she objected, saying she has got a brain that only few people can beat.

“My greatest asset would have to be my brain. I mean, you can't just beat it. I'm brainy than you think or even know,” she said instinctively.

According to Halima, “I have won awards and done brilliant things, I have won three awards plus recognition certificates from Jos and Jalingo, so I'm not all about acting skimpy roles.

“Well, I really don't know if any of my films was submitted for this year's AMAA (African Movie Academy Awards) but it will come one day and I would win an AMAA,” she said on her aspiration to win an AMAA.

Growing up for every celebrity comes in different forms with exciting stories and in the case of Halima, it was filled with so much love from her parents, especially her mother.

“My growing up was beautiful and filled with love, my mum, God bless her, is the best mum, I adore you mama. My dreams were to make a difference in any thing I do and initially I wanted to be a footballer but God had his own plans for me. The love for acting actually propelled me into it. I used to watch a lot of foreign movies and I said to myself I could as well do more than they were doing and that was how I decided to move forward and here I am today doing it in my own country and in our own way.

“Though I have not achieved half of my aims and aspirations, I mean not even a quarter. Well, we are getting there gradually; you know it wasn't like this before. Things are really changing for the better and I am happy that I am involved in Nollywood,” she said about her growth and worth in the industry.

To hippy Halima, flicks like Wild and Dirty, Dangerous Beauty and Lost Maiden, have no doubt brought out the best in her even though working late into the night has been the hardest part.

“The films that brought out something in me has to be Wild And Dirty, Dangerous Beauty and Lost Maiden. Meanwhile, having to work late into the night would have to be the hardest part of being on locations,” she said.

“The Nigerian film industry is at its peak. Everyday is a revelation and I'm proud to be in the industry. Nollywood has changed tremendously and it can still be better. The payment is way better and the calibre of actors are high class, the directors are mind blowing,” Halima said of her take on the Nigerian movie industry, which she ventured into 10 years ago.

Halima, who plans to be better every second of her life, said she has her parents as her biggest fans even though she was said to be at loggerheads with her father over her scandalous roles at some point in her career.

Halima believes in doing her own thing her own way and even with marriage, she believes it would come when it comes.

“Of course marriage will come when it wants to come,” was her last response.