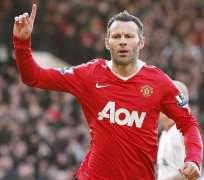 Ryan Giggs announced Monday he was retiring from his career as a player following his appointment as assistant manager to newly-installed Manchester United boss Louis van Gaal.

The 40-year-old one-club man revealed his decision in an open letter to supporters published on United's website.

His statement signalled the end of the career of English football's most decorated player with Giggs, the winner of 34 major trophies, bringing down the curtain on a 23-year career featuring a United record 963 appearances.

'Today is a fantastic day for Manchester United,' Giggs, caretaker manager for the final four games of the season after the club sacked David Moyes, wrote.

'Louis van Gaal is a great appointment and let me begin by telling you how delighted I am to be working with someone of his calibre. His credentials are second to none and I'm positive the club will thrive under his leadership over the coming years.'

Giggs, who thanked United's backroom staff and his family for all their support since he made his United debut as a 17-year-old in 1990, said his prevailing mood was one of optimism.

'For me, today is a new chapter filled with many emotions â€' immense pride, sadness, but most of all, excitement towards the future,' the former Wales international explained.

'United fans I hope will share and echo my belief that the club, the management and owners, are doing everything they can to return this great club to where it belongs, and I hope to be there every step of the way.

'To the greatest fans in world football, thank you, I have loved every minute of playing for you and representing the biggest and best club in the world.'

Giggs was one of the most celebrated players to emerge from the Old Trafford 'Class of 92â€² that won the FA Youth Cup.

United executive vice-chairman Ed Woodward was in no doubt about the winger's place in football history, saying: 'Ryan Giggs has been one of the greatest players ever to wear the red shirt of Manchester United.

'What he has achieved will never be equalled in the English game.

'In the way he played, he was the embodiment of a Manchester United player â€' fast, skilful, entertaining and determined to win by playing exciting football.

'He is at the start of an exciting new chapter in his and the club's life but now is the right moment to reflect on the achievements of the finest British player of the last 25 years.' AFP