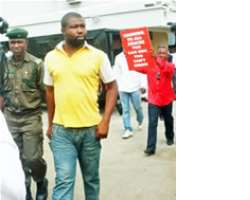 NIGERIAN Copyright Commission (NCC) on Tuesday at the Federal High Court 15, Ikoyi Lagos, arraigned Mr. Tony Onwujekwe, a.k.a. 'Alaba King of Pirates', on a three-count charge bordering on large-scale piracy of several copyright-protected musical and audio-visual works belonging to different local and international right owners. The accused pleaded not guilty to the charges against him contained in Charge No. FHC/L/33c/2010.

The assistant director, public affairs, NCC, Mr.Vincent Oyefeso, told us that the suspect had been under the Commission's surveillance since July last year. “He was arrested on November 5, 2009, following a complaint by Okah at the Ojo Police Station in Lagos, alleging piracy of his recorded music in CD format. The Police transferred the matter to the Commission for prosecution on request”, he said.

The case was adjourned till February 18 and 23 for consideration of bail and trial respectively. The accused has been remanded in prison custody.

Meanwhile, it was jubilation galore as gaily artistes and other stakeholders stormed the court to witness the arraignment of the suspect alleged.

Okoroji said the arraignment of Tony should be enough warning that it is no longer business as usual. “ Let no one be in doubt of our resolve to go after the rest of the cabal at Alaba that has held the music and video industries hostage for so long,” he said.