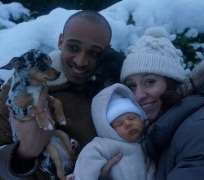 Popular Nigerian Footballer Peter Osaze Odemwingie who also plays as a striker for Premier League club Stoke City and his wife welcomed a son yesterday May 15th,2014, three weeks before he was due. The footballer made the announcement on his twitter page .

You will recall that the couple got married on May 2012 and welcomed their first son, Noah, in January 2013. The new baby has been named Theo.