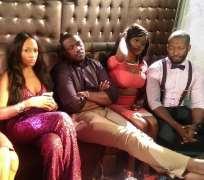 John Dumelo is believed to be one of the hottest guy in Ghana movie industry and on several occasions, the good looking dude has been spotted with this screen diva Rukky Sanda which has make movie lovers to tag them as lovers .

But this time , its not about their love life , as the ghollywood actors,john dumelo,rukky sanda,Seun akindele are all starring in a tv commercial for 'Alomo bitters'.

According to a source,they were paid 5million each to be part of this new advert in promotion of their new brand