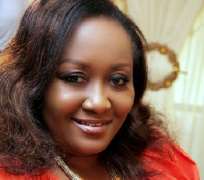 The movie which seeks to make a strong case for people living with the 'Autism' medical disorder in the society, which is characterised by impaired development in communication, social interaction and behavior, shows how love, care and affection should be given to them instead of abandonment and resentment.

The lead casts of the movie been played by talented Nollywood actors Kalu Ikeagwu and Chioma Akpotha, also saw Veteran Nollywood star Ekpeyong Bassey and others, the likes of Victor Okenwa, Belinda Effa, Bruno, Chuma Okaro, Chikezie Uwazie, Chinedu Mbadiwe and with special guest appearance by Raggae musician Orits Wiliki as the personalities that made up the cast of the movie.

'Musical Whispers' was shot in Lagos and produced by Ebele Okaro- Onyiuke and directed by the former President of Directors Guild of Nigeria Bond Emerua. Director of Photography was handled by Ayo Johnson Production.

The Movie is said to premiere on Friday, 30th of May in Lagos state, and it is sponsored by top Pharmaceutical Giants Neimeth Nigeria Plc