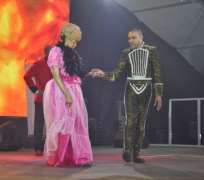 Delectable and beautiful Yoruba star, Nike Peller who is the daughter of late magician, Professor Peller, has decided to quit acting for sophisticated tricks (Magic).

The actress who was given a chieftancy title in Osun state by an Indigenous Oba sometime in the year 2010, joined her brother Zito Peller for Magical performances on stage at a movie premiere which left the audience breathless with their stage performance.

The duo who were paid heavy sum of money to perform at the Gulder Club Ultimate Launch show, saw Nike join her brother Zito, on stage for performances where her brother made her float in the air magically.

Nike who is the YEYE AGBASAGA of ERIN OSUN in Osun State, has been performing with her brother for over a year now, as she is learning the captivating and spell binding act of supernatural powers so fast, a source stated.