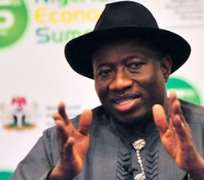 President Goodluck Jonathan  Tuesday sought the approval of the National Assembly for the extension of the emergency rule in the three North-east states of Borno, Adamawa and Yobe States.

The request was read on the Senate floor on Tuesday morning.

The emergency rule was first introduced in the three states in May last year, before it was extended by another six months in November.

A further extension will ensure it continues to November, three months to the general elections in Nigeria.

President Jonathan had hinted during his last Presidential Media Chat on 4 May that the emergency rule would be extended.

He said that the emergency rule was necessary for soldiers to effectively tackle the insurgency in the region.

Adamawa, Borno, and Yobe are three of the states most affected by the Boko Haram insurgency.

Critics of the emergency rule have stated that it has not reduced or stopped the killings by the Boko Haram insurgent group in the states.

At least two thousand people have been killed in Boko Haram related violence in the three states in 2014 alone.

The extension of the emergency rule would have to be approved by both chambers of the National Assembly to be considered legal.

The president in letters addressed to Senate President David Mark and the Speaker of the House of Representatives Hon. Aminu Tambuwal, urged the lawmakers to act speedily on the matter.

.
Jonathan said in the letter that extending the emergency rule was an option to consider because the security situation in the affected states had not improved.

The security situation in the three states, he said, remained daunting in view of persistent attacks by members of the Boko Haram sect, which have ratcheted up their attacks on both the civilians and the military.

The letter reads, “May I respectfully draw your attention to the state of emergency proclamation 2013, in respect of Adamawa, Borno and Yobe States, which was approved by the National Assembly. By virtue of the provisions of Section 305(6)(c) of the Constitution of the Federal Republic of Nigeria, 1999 as amended, the proclamation aforementioned would have elapsed after six months from the date of approval of the National Assembly.

“However, after due consideration of the representations made to the Senate/House of Representatives of the Federal Republic of Nigeria to the effect that, while substantial progress had been made to contain the situation and restore normalcy in the affected states, the security situation that necessitated the proclamation of a state of emergency is yet to abate.

“It would be recalled that the Senate of the Federal Republic of Nigeria had upon consideration of the realities of the security situation in the affected states that had been placed before it, graciously approved by resolution, the extension of the state of emergency for a further term of six months from the date of expiration of the subsisting period.

“Distinguished senators, the security situation in the three states remains daunting, albeit to varying degrees, in the face of persistent attacks by members of the Boko Haram sect on civilian and military targets with alarming casuality rates.

“In view of the foregoing, I most respectfully request the distinguished senators to consider and approve by resolution, the extension of the proclamation of the state of emergency in Adamawa, Borno and Yobe States by a further term of six months from the date of expiration of the current term.

“I look foward, Distinguished Senate President, to the usual kind of expeditious consideration of this request by the Senate of the Federal Republic of Nigeria. Please accept, as always, the assurances of my highest consideration and esteem.”

In the House, after the Speaker read out the president's letter, he said the lower chamber would debate the request on Wedneday.

However, there were pointers Tuesday that the preident's request is likely to face still challenge in the National Assembly. Some senators and House of Representatives members especially those from the have given indications that they would oppose the request.

Yobe State Governor, Alhaji Ibrahim Gaidam, is also opposed to the extension of the emergency rule in the tree states, which his Yobe State is among.

The governor in a statement by his Special Adviser, Press Affairs and Information, Mallam Bego Abdullahi, rejected the extension, saying it is not needful.

.
The statement reads, “It has come to the notice of Governor Ibrahim Gaidam that President Goodluck Jonathan, has written to the National Assembly asking for yet another extension of emergency rule in Borno, Yobe and Adamawa States, as the current emergency rule expires in the next few days.

“The Yobe State Government, under the leadership of Governor Gaidam, takes very strong exception to this move by the president. We believe that extending emergency rule is not the answer to the prevailing security challenges in the three affected states, in view of the apparent failure of the same measure over the last 12 months.”

The governor went further to state that in May 2013, he had supported the first emergency declaration made by the president.

“He did so because he believed a more heightened effort was needed to deal with the escalating security challenges at the time. Six months on, emergency rule was a mixed-bag that was marked more by failure than by success.

“So when the president went back to the National Assembly in November 2013 to ask for an extension, Governor Gaidam was among many leaders across the country who expressed reservations and asked for a change of strategy.

“For instance, over the six months of emergency rule and later over the second, we have seen some of the worst attacks by Boko Haram in Yobe State.

“From GSS Damaturu to GSS Mamudo to College of Agriculture Gujba and FGC Buni Yadi, more than 120 students were killed by insurgents. There were many other attacks in Gujba and Damaturu local governments.

“Although the security forces on the ground have done and continue to do their best under the circumstances, insurgents and criminals have always carried out attacks when they wanted to and have almost always got away with their barbarous and despicable acts.

“As the president now asks for another extension, it is time to ask whether any lesson has been learnt over the previous 12 months and whether the very patriotic suggestions made by the Yobe State government, other affected state governments and Nigerians generally, have been taken into account in the ongoing effort to deal with Boko Haram insurgency,” the governor said.

Gaidam recalled that he and his Borno and Adamawa State counterparts had suggested that the military and security forces deployed in the area needed to be fully and properly kitted with superior weaponry and advanced communications equipment.

“The governor has particularly stressed the need for more technology-driven intelligence gathering and surveillance procedures to be able to detect and prevent attacks.

“Second, the governor had stressed the need to carry the people of the affected states on board in the fight against the insurgency. This suggestion was borne out of the fact that the very doctrine of counter-insurgency, as propounded by US military generals in Afghanistan and Iraq, was conceived as a means of winning the support of local, affected populations as much as scoring a military victory against insurgents.

“We have seen over this period, however, that the federal government has neither provided the advanced weaponry and communications gear needed to defeat Boko Haram nor worked to build and sustain the confidence of the people in the affected states,” the governor lamented.

He insisted that from Izge to Konduga and from Buni-Yadi to Chibok, thousands of people have been affected in the most gruesome manner, pointing out that the president never even found it worthy to pay a sympathy visit to any of the affected areas.

“We also note that the problem of insecurity is now more of a national problem than an issue restricted to Yobe, Borno and Adamawa States alone.

“There are security challenges in Plateau, Nasarawa, Benue, Taraba and Kaduna States and even the Federal Capital Territory. Yet, in all these places, the military and other security forces have continued to do their work of trying to restore order without emergency rule being declared by the president.

“It is therefore our considered opinion that a new approach is needed by the federal government to defeat Boko Haram, restore peace and stability, and rebuild the livelihoods that have been lost.

“This approach should look at the prevailing challenges in the three affected states as a security challenge rather than a political one and should build on the suggestions already made by the governments and people of these states.

“It is our considered opinion that the military and other security forces can remain on the ground in the affected states and do their work until Boko Haram is defeated or made to surrender. In fact, we request that more boots should be deployed to accelerate the pace of effort against Boko Haram. We believe, however, that this can be done without the imposition of a state of emergency.

“We also believe that the federal government needs to evaluate its military strategy regularly, provide additional and superior weaponry to the security forces and use the endowments of advanced communications and satellite technology to be several steps ahead of the insurgents,” added Gaidam.

He noted that his suggestions along with confidence-building measures that see and regard the hapless and distraught people of the affected states as partners in the search for peace, would ultimately be the elixir for the security challenges the states face.

“The issue therefore is not another extension of emergency rule. The issue is whether the federal government can summon the courage to try these suggestions and to explore new ways to bring the insurgency to an end without repeating a stale and sterile measure. which has failed over the last 12 months,” he said.