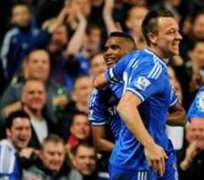 Chelsea captain John Terry has ended speculation about his future by signing a new one-year contract at Stamford Bridge.

The former England skipper was one of three high-profile Chelsea players – together with Ashley Cole and Frank Lampard – who ended the Premier League campaign facing uncertainty over whether they would remain at Stamford Bridge.

However, while it remains to be seen if Lampard and Cole agree new deals, Terry will definitely spend a further 12 months with the team he first represented in October 1998 after joining as a trainee at the age of 14.

“I'm delighted to have signed an extension to my contract with Chelsea taking me into my 20th year with the club,” Terry told the club's official website. “I'd like to thank the fans and club for their continued support, and the manager who was instrumental for me the last season.”

All but six of Terry's career club appearances have come in a Chelsea shirt – he had a brief loan spell at Nottingham Forest in 2000 – and the 33-year-old has been reinvigorated following Jose Mourinho's return as manager.

An increasingly peripheral figure under Rafael Benitez, partially because of injuries, Terry became a first-team regular again during the 2013-14 campaign, starting 34 of Chelsea's 38 league games.

The center back has made 621 outings for Chelsea in total, winning three Premier League titles, five FA Cups, two League Cups and both the UEFA Champions League and Europa League.

“We are very pleased John, who is an undoubted Chelsea legend, will continue to lead the team next season, as he has done for so many years with unrivalled achievement,” Chelsea chief executive Ron Gourlay said. “Both Chelsea FC and John have been clear throughout that we wanted his outstanding career at the club to continue, and it is important the matter has been concluded so soon after the end of the season, allowing us to look forward to and plan for 2014/15.”