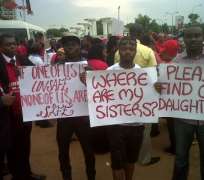 Hundreds of women on Sunday staged a peaceful protest in Accra, Ghana, against the kidnap of over 200 students of Government Girls' Secondary School, Chibok, Borno state, by Boko Haram.

The women marched through some major streets of Accra and ended at the Nigerian High Commissioner's premises where a petition signed by over 300 people was presented to the High Commissioner.

The protesters carried placards with various inscriptions, and chanted solidarity songs to bring back the kidnapped girls.

Some of the inscriptions read, 'Bring back our girls,' 'Release the girls now,'' 'We want action now.'

Eugenia Menson, Chief Executive Officer, Young Educators Foundation, who read the petition on behalf of the group, said there was the need to respect the right of the girls.

She said the abducted girls had the fundamental human rights to be educated, and they had the inalienable right to be girls.

She said the protesters were just a representative of the swelling voices of Ghanaians and other people round the world who believe that 'any extra second we spend not finding our girls was one second too many.'

Menson also urged the High Commissioner to press upon the Nigerian government to do everything possible within its power to bring back the girls.

His Excellency Ademola Onafonoka, Nigerian High Commissioner to Ghana, assured the group that the Federal Government was working tirelessly to bring back the girls.

'Let me thank you for your out pouring of emotions, and solidarity for your empathy.

'I am assuring you as a father that our daughters will be found and brought back to all of us alive and well,'' he said.

The Chibok schoolgirls, aged between 16 and 18 years, were abducted by Boko Haram, last month. NAN