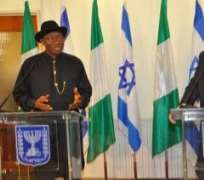 A statement released by Dr. Rueben Abati,  Special Adviser to the president on Media,  said that Netanyahu, currently on an official visit to Japan, made the proposal in a telephone call to Nigerian President Goodluck Jonathan.

'Israel expresses its deep shock at the crime against the girls,' it quoted the premier as saying.

'We are prepared to help in locating the girls and to fight the cruel terror which has struck you.'

Boko Haram, whose name is loosely translated as 'Western education is forbidden' kidnapped the girls from their dormitory on April 14, and has threatened to sell them.

The abduction caused worldwide outrage and offers of help, including from US President Barack Obama.