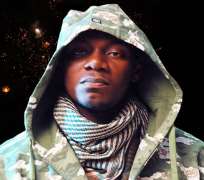 Some of the nation's leading entertainers, on Friday joined in the call for the release of the school girls that were abducted from their school over three weeks ago by Boko Haram.

The abduction of the girls from their school in Chibok, Bornu, had since elicited worldwide condemnation.

The celebrities who spoke in separate interviews in Lagos said that the girls must be released unconditionally.

Bankole Wellington, popularly known as 'Banky W'' said that the return of the girls was not subject to negotiation.

'We want our girls back. The issue at stake is the whereabouts and the restoration of those poor little girls to their respective parents.

'But is that possible after over three weeks of abduction by terrorists? We just have to keep our fingers crossed,'' he said.

An actress, Kate Henshaw, said that the abduction of the innocent girls was wickedness in the highest order.

'No one can fool, God; no one can challenge God.

'Anybody who tries to fight against God loves death. Boko Haram at the moment, is trying to attack God by kidnapping His beloved daughters and talking rubbish,'' Henshaw said.

In the same vein, Sound Sultan, a musician, said that 'the Boko Haram leader, Abubakar Shekau, is just being stupid and satanic.

'Shekau in his demonic lies against Allah said that it was God that instructed him to sell human beings as slaves.''

Another thespian, Bimbo Akintola, said that 'we need all hands on deck. The problem is with the girls in Boko Haram's custody; they would be used as human shields.

'But nightmares like this will always come to an end, no matter what, as God will expose them. All of them will regret their acts,'' she said.

Another actor, Femi Brainard, asked why the group seemed to be in a perpetual state of unrest.

'Why do they lack an appreciation for the beauty of life?

'Why are they so murderous over people of other religions and disregard their rights? What drives them? Why don't they believe in living in harmony with others?