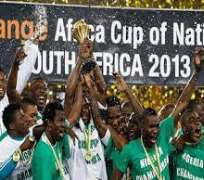 The Super Eagles of Nigeria are now ranked 44th in the world, according to the FIFA rankings for the month of May, which was released on Thursday.

This signifies just a step up for Nigeria, as they were previously ranked 45th. The African champions however remain sixth in the continent behind Cape Verde.