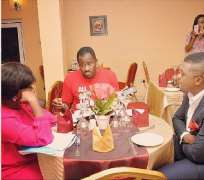 Filming of the movie, 'Almost Perfect', produced by Uche Jombo, has been wrapped up. The flick was directed by Desmond Elliot and it stars Ken Erics, Michelle Dede, Daniel K. Daniel, Uche Jombo, and Desmond Elliot.

Nevertheless, pregnancy does not seem to be slowing down Uche Jombo, as this is believed to be the second movie she is producing since returning from the United States of America (USA) in March. She has also starred in two productions, namely 'Wives on Strike' directed by Omoni Oboli, and 'Folly' directed by Alex Mouth.

Nollywood actress Uche Jombo is reportedly expecting her first child with her husband, Kenney Rodriguez. The actress is said to be in her first four months of pregnancy. Uche Jumbo and Kenney got married in Puerto Rico in 2012. Is Rukky Sanda desperate for a new blonde personality?