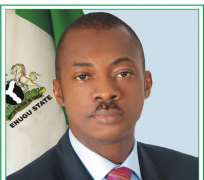 The face-off between Deputy Senate President, Ike Ekweremadu, and Enugu State Governor, Sullivan Chime over the 2015 gubernatorial election is beginning to rob-off on traditional rulers in the state.

To this end the monarch now run the risk of being dethroned and their certificates of recognition withdrawn from them should any of them confer chieftaincy title on the Ekweremadu.

One of the monarchs who would not want his name on print told Saturday Independent that the state government issued a directive that before any traditional ruler confers title on anybody, he (the traditional ruler) must get clearance from government.

'I do not know why they gave us this order. We, as traditional rulers, have the right to confer chieftaincy title on people with proven integrity. We also carry out investigations on the background of such people before giving the title. So we wonder why the order was handed down to us. Nobody has ever faulted this exercise before. But I feel that it has to do with politics and it is not proper. For now, most of us are been careful about conferring chieftaincy title on politicians. The political problem in our state is greatly affecting everybody including us. We are non partisan and we do not get involve with politicians in their politics.

'Once you talk about coronation, some people come to your palace to find out who are the people that you want to give chieftaincy title. Most of us are even afraid to receive politicians in our palaces,' our source said.

Also speaking the monarch of Ogwui Nike in Enugu North Local Government Area, Igwe Tony Ojukwu, told Saturday Independent, 'it is a government order and it is written and we are aware of it. But for me, I do not have anybody to confer chieftaincy title on that is my position and I do not know if it is legal or not for government to stop traditional rulers from conferring titles on deserving citizens.'

Ekweremadu who is being touted to contest the governorship position in the state is allegedly not receiving the blessing of Governor Chime who had indicated his interest in zoning the gubernatorial position to Nssuka.

The governor is also nursing a senatorial ambition in 2015 for the same Enugu West District which Ekweremadu is currently representing.

Against this backdrop, the state government had before the chieftaincy title on Ekweremadu warned that any monarch that confers such title without clearance from it would have his certificate withdrawn.

Despite this directive, the Odume community held a reception where they conferred Ekweremadu with a chieftaincy title which apparently vexed the authorities at the Government House Enugu.

Sequel to this, a statement was issued by government which was signed by one Ibe Nnamani on behalf of the commissioner for chieftaincy matters banning the conferment of titles in the state.

The statement further claimed that no monarch conferred any chieftaincy title on Ekweremadu contending that the reports on the dailies were false.

But the Media Assistant to the Deputy Senate President, Mr. Luke Agbo, told Saturday Independent 'you were there on that day and you saw all that happened. The people are happy with what their senator has done for them. Before the occasion, we carried out an inspection of projects being done by the Deputy Senate President you saw the N12 billion road project that cuts across the senatorial zone which is being done by SETRACO Construction Company. Before the project the state of the road has been deplorable; especially during rainy season and the people are happy with the project. That was why the people gave him a chieftaincy title.'

Agbo also contended that 'the law banning conferment of chieftaincy title was never legislation by the Enugu State House of Assembly and we see this as a usurpation of the functions and powers of the legislature. So anybody who is claiming that there is a law on that is only deceiving the public. Also you cannot choose to make a law that is retroactive because you do not like the face of one person.

'You also cannot stop people from showing appreciation to some one that brought development and good populist representation to them. The people have the right to commend the person in any form or manner and the conferment of chieftaincy titles is one of them.'

Effort to speak with the chief Press Secretary to Governor Chime proved abortive as he was on an official assignment and could not be reached. Daily Independent