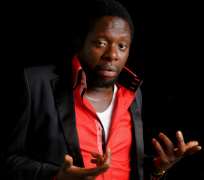 Comedian KlintdaDrunk has expressed his shock over the fake usage of his name to extort his potential fans on the social network 'Twitter.'

The comedian through his publicist, Joy Akosa, released a press statement today warning the public to be mindful of the fake twitter account.

A survey carried out by Nollywoodgists.com shows that the said twitter handle of the impersonator has 279k followers, 1,347 tweets and following 1.

This leaves us with the question, how can Klintdadrunk be following just one person on twitter?

“My attention has been drawn to a twitter handle (@klintThe drunk) which makes fans assume that Comedian Klint da drunk is now running an advertising agency on his Twitter handle.

The impersonator has used the comedian's name to fraud fans on buying products from him, like phones, car parts and other goods he might have put up for advert on the page.

The real twitter handle of Klint da drunk is @mistaklint kdD. thank you.