NFVCB Delay Release Of Half A Yellow Sun Movie 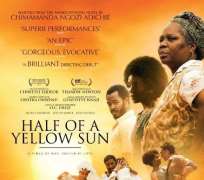 The release of Chimamanda Adichie's 'Half Of A Yellow Sun' movie which was premiered in Lagos last week has been delayed by The Nigeria Film and Video Censorship Board, (NFVCB).

From information gathered the delay in certification is allegedly due to the fact that some scenes in the movie tend to whip up tribal sentiments, especially on issues concerning the Nigerian civil war.

Right now the movie promoters are making efforts to edit and remove scenes in the movie that might be offensive and get the film approved.

Here's a statement the production team of the movie released:

“The highly anticipated release of #HalfofaYellowSun in Nigeria has been postponed to 2nd May 2014, due to delays in obtaining certification from the Nigerian Film and Video Censors Board for the public release of the film.”