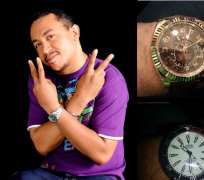 On Air Personality Ifedayo Olarinde, popularly known as Freeze, with CoolFM Radio, Lagos state, has joined the list of celebrities showing of their assets.

No doubt, Freeze loves luxurious brands. It is to be recalled that sometime early this year, in an interview with Punch newspapers, Freeze was asked which designers he wouldn't be caught wearing, the fair skinned Presenter said; “it'd definitely not be Micheal Kors”, he described the brand as “Loud, Ugly and cheap”.

“I am sorry but I just think that brand is so razz. First their name, I think their name is so razz. Not exactly the name, it is the brand, all you have for the logo is MK. Their products are loud, ugly and cheap', Freeze said.

He went on to describe the high end brand as always coming second place to other top brands; “I see someone wearing a Michael Kors watch and I see it as they are trying so hard to wear Rols gold. I can't afford that so the next thing is to pick up Michael Kors, I would rather take equally priced designer but with a bit more class and less noise. I would never be caught wearing that”. He added.

“And which kind of designers does Freeze love to wear, he says 'Designers I like are Tom Ford, Gucci, I love LV shoes that are not monogrammed. I like Hermes; I think that is a really brilliant designer. I like the fact that they play with orange a lot”