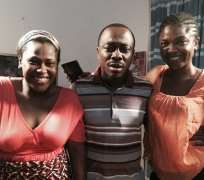 Popular Nigerian Comedian Julius Agwu, recently shared a photo of him while working on set of a new movie 'Wives On Strike' flanked by Nollywood Actresses Uche Jombo who is currently heavy with child and Omoni Oboli, the director of the movie.

It is not surprising as Uche has always shown herself to be one Strong woman. The beautiful star who is a cast in the movie 'Wives on Strike', shot her own movie production called 'Oge's Sister' recently before she made her joyful announcement.

Check out the photo of the Julius Agwu, Uche Jombo and Omoni Oboli on Set, and see also photos of the filming of 'Oge's Sister'.