Bovi Shows Off His Little Jewel 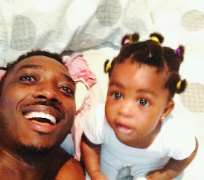 Comedian Bovi and his wife welcomed a baby girl on the 25th of September 2013 , Bovi's wife Christabel Ugboma gave birth to their second child – a beautiful baby girl, the little girl has grown big within a few months, as he posed with her in new photos, showing off his little jewel. See photos