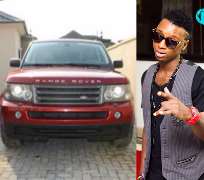 Controversial Nigerian teenage rapper Onome Onokohwomo, popularly known as Yung6ix a.k.a Sixty, who became a web hit with his remix of Brymo's monster hit 'Oleku' (Warri version) has newly added an automobile for himself.

“Plus one to the garage- all I wanna say is Thank You Lord for the new ride” the excited rapper shared the news on social media.

The Warri-born didn't stop there; as he went on to show off the brand of car saying, “Congratulations to myself on my new Range Rover Sport – Bentleys and Porsche's up next – Grind don't stop #KKBTM #Just Know” Big Boy things”.

Yung6ix who acquired a new crib in the year 2013 also announced on social media that he is the best rapper in Nigeria.