When Olamide, D’Banj, Iyanya, Others Thrilled Guests at Yaw Live On Stage 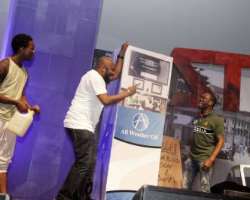 The most talked about 'Yaw Live On Stage' has finally come to an end. An amazing team of Nigerian entertainers converged at the Eko Hotel and Suite for the glamorous theatre-styled concert, which was tagged 'The Street'.

Iyanya, Olamide, D'Banj, Sound Sultan, M.I, Phyno and many others joined the Wazobia FM star, Yaw and colleague, Julius Agwu to deliver what would go on record as the biggest stage play/music concert in Nigeria.

Top Nigerian comedians including Ali Baba, M.C Abbey, Okey Bakassi, Funny Bone, Akpororo, Elenu, Laff Up, Senator, Chigurl, and Emma Oh my God amongst many others ensured guests were reeling with laughter throughout the event.

Also, Cool FM's DJ Xclusive had guests screaming for more with his throw back mixes as he performed hit after hit from popular Nigerian tracks from the past.
“I'm so grateful to everyone who came out for 'Yaw Live On Stage 6'. I'm humbled by the support my team and I received with each edition and we are already working on a bigger package for the next season!” Yaw said after the show.

Top dignitaries and entertainment icons such as First lady of Lagos state, Dame Abimbola Fashola; Hip TV Boss, Ayo Animashaun; Ali Baba; BasketMouth; Funke Akindele; Segun Arinze among many others were some of the notable faces spotted at the event.