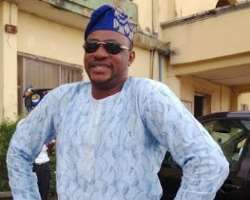 It is no more news that popular Yoruba actor, Odunlade Adekola has gained admission into the prestigious University of Lagos (UNILAG). The Abeokuta-based actor was said to have returned to the classroom to study Business Administration, development that excited his numerous fans.

Those who know Odunlade too well attest to the fact that the actor is not very fluent in English language, which is the official language in Nigeria. The actor's inability to speak English language fluently is said to be the reason why Odun, as he is fondly called, runs from journalists, especially those who seek for interviews from him.

As Nollywoodgists.com gathered from close sources to him, Odunlade only give ears to journalists he knows would come down to his level for interviews.

So, when news went viral that the actor had secured an admission into UNILAG, many applauded the move and further expressed hope that his spoken English would meet the standard of those in that respected citadel of learning.

However, from the look of things, Odunlade is yet to pick up, this we can authoritatively inform you for free. His spoken English is still terrible. The popular Yoruba actor is still not obeying the rules of 'concord' and the use of 'tenses'.

With the way Odunlade is 'murdering' English language, the Queen of England could order for his arrest and prosecution. We only hope UNILAG will impact on the life of this actor by the time he finally graduates from the school. But for now, fingers are crossed.

Behind the Scene: Goldie 'Say My Name' Video Shoot