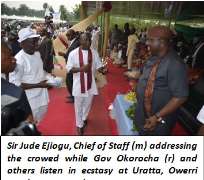 The rumour making all the rounds that the Chief of Staff and Commissioner for Special Duties, Sir Jude Ejiogu is a political colossus in the state was on Monday, April 7th, 2014 uncovered as individuals from all walks of life trooped en mass to catch a glimpse of Governor Rochas Okorocha's project verification tour at the council headquarters, Uratta.

Governor Okorocha whose joy was rekindled on seeing a mammoth crowed who waited under the fierce sun at the Uratta junction close to the council headquarters to herald him and the Chief of Staff, Sir Jude Ejiogu for their people oriented administration in the state.

It was gathered that the number one citizen of the state almost forgot that he was on a project verification tour owing to the large turnout of people made up of market women, youths, traders, artisans, professional and peasants to cheer him and their son, Sir Jude Ejiogu as a thank you message for remembering their people who according to them were relegated to the wall prior to the rescue mission administration.

Our correspondent who monitored the exercise observed that the turnout was a replication of the accolades Governor Rochas Okorocha received shortly after his declaration as the helmsman of the state by the Independent National Electoral Commission (INEC) in 2011 general elections and described the exercise as a political tornado.

In his speech, Governor Okorocha stated that Owerri North council area is becoming the stronghold of the state political base of Imo State where every administration should concentrate adequately for transformation or be messed up and acknowledged the efforts of the people of the area in ensuring his victory as the governor of the state during the 2011 gubernatorial election.

Governor Okorocha therefore reiterated his determination to continue to sustain the support the people of the area have given to his government saying that plans are on top gear to site more relevant projects in the council as part of his administration's objective to better the lives of Imolites even while describing the Chief of Staff and Commissioner for Special Duties, Sir Jude Ejiogu as a man that has proven to be trusted with any position.

He also thanked the people of Owerri North for appreciating his government's efforts in bringing sanity and development to the area and assured them that his administration would not hesitate in giving more sensitive positions to their sons even as he urged them to discard issue of zoning as according to him, what matters remain leadership that attracts majority and transformation.

Also speaking, the Chief of Staff and Commissioner for Special Duties, Sir Jude Ejiogu described the visit as part of the rescue mission government's determination in ensuring proper completion of all road projects it embarked upon and appealed to his people not to see the visit as having political undertone in order to avoid misinterpretation.

Sir Ejiogu while speaking further maintained that Owerri North remains the foundation of every political business in the state and vowed of his people's willingness to continue to support the present administration.

The Chief of Staff therefore pointed out that any leader who makes the good people of the LGA to hiss a sigh of relief automatically becomes a bonafide son and friend of their people noting that Governor Okorocha has given the people a cause to have trust on their leaders and as well becomes the true son of Owerri nation thereby nipping in the bud all issues relating to zoning even as he re-affirmed their massive support to the present government in the state.