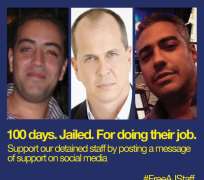 To mark the 100th day of the detention of Al Jazeera English staff Peter Greste, Mohammed Fahmy and Baher Mohamed, Al Jazeera is urging people to join in by sending their own personal messages to the detainees on social media using the hashtag #FreeAJStaff on Twitter, Vine and Instagram.

Al Jazeera itself will be releasing an online video of support from the families, friends and colleagues of the Al Jazeera staff who have been detained. The video, alongside public support on social media, will attempt to build on the online #FreeAJstaff campaign, which has already had 800 million impressions on Twitter alone since 1 February 2014.

Al Jazeera hopes the attention of the world's media will put pressure on the Egyptian authorities to hasten the release of Greste, Fahmy, Mohamed and Al Jazeera Arabic correspondent Abdullah Al Shamy - who has been detained since August 2013 - by reminding them, in a united voice, that journalism is not a crime.

In New York, a press conference will call on the Egyptian authorities to immediately release its journalists.

An event will also by held by the Columbia Journalism School, showing support for solidarity with Al Jazeera.

In London, at the Journalist Safety Symposium taking place at the BBC, Heather Allan, head of newsgathering at Al Jazeera English, will deliver a speech outlining the current situation in Egypt. After the Symposium, delegates, journalists and media freedom organisations will be hosting a protest and photocall at the Piazza at New Broadcasting House.

The Foreign Correspondents' Association of Southern Africa will also be holding a protest outside the Pretoria High Court with attendees taping their mouths standing in solidarity with Al Jazeera.

Al Anstey, managing director of Al Jazeera English said, 'Mohamed, Baher, and Peter have now been behind bars in Egypt for 100 days for simply doing their job, and for carrying out the highest quality journalism. The charges against them are false and baseless, so there is no justification whatsoever in the detention of innocent journalists for such an outrageous amount of time. We continue to call for their immediate release and for the release of our colleague from Al Jazeera Arabic. Abdullah Al Shamy, who has been behind bars for 236 days.

'We are very grateful for the immense support of our staff from right around the world. The response to their detention has been outstanding. Over 40,000 people have been actively involved in the campaign; events have been held in over 30 countries and in every continent; there have been over 800 million impressions of the FreeAJStaff hashtag; and there have been repeated calls for an end to the detention of our journalists from governments, as well as media organisations from all corners of the globe. The campaign is focussed on the release of our four staff, but is fundamentally a stand in the defence of journalism itself, and a call for people everywhere to have a right to be heard and the right to know what is really going on in their world,' said Anstey.

Since 29 December 2013, there have been calls for the release of all Al Jazeera staff detained in Egypt from the White House, the British Foreign and Commonwealth Office and the European Union. Similarly public calls of support for the #FreeAJStaff campaign have been made from prominent media personalities like Christiane Amanpour from CNN, ITN's Mark Austin, Channel Seven Australia's Mark Ferguson, SKY news correspondent Sam Kiley and the BBC's Lyse Doucet. Various media freedom and human rights groups have issued statements, ranging from the Committee to Protect Journalists, the International Press Institute, Amnesty International and Foreign Correspondents' Association of East Africa.