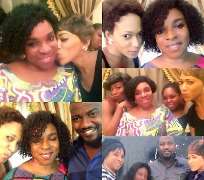 It is gathered that Nollywood actress, script-writer and producer, Rukayat Sanda, popularly known as Rukky Sanda is currently working on her new movie, titled 'Caroline'.

While on set, the pretty actress shared a photo of herself with Liz Benson and John Dumelo, which she captioned,'#rsp#Caroline #movie #OnSet #LizBenson #JohnDumelo #RukkySanda #AyoAdesanya#DanielLoyd '.

Apparently, beautiful veteran actress, Liz Benson- Ameye is stylishly announcing her comeback to the film industry, after a long time been of been on the lowkey. The actress has only done two interesting Nollywood movies (Dry & Living Funeral) since 2007.