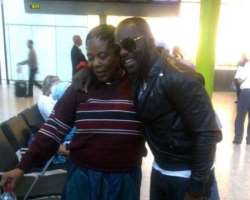 Nollywoodgists.com can authoritatively report that the mother of Nollywood's 'bad boy' actor, Jim Iyke, has died. This news was confirmed to us by a source close to the prolific actor.

"Yes, Jim Iyke's mother is dead, but she didn't die on April 1 as it is being widely reported. The old woman died last Monday in Abuja," the source informed Nollywoodgists.com.

The source further divulged to us that the actor's mum gave up the ghost at the Garki Hospital [Abuja] after she was rushed there by her family. "She died of stroke. The woman has been sick for some time now and has been staying with Jim Iyke in Abuja," the source disclosed.

From further information revealed to Nollywoodgists.com, Jim Iyke flew into Nigeria from Ghana last week after he received the shock news of his mother's death and has reportedly returned to Ghana again. We were told that he returned to Ghana some hours ago.