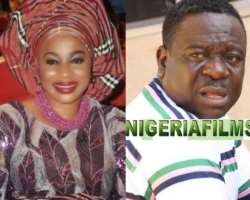 More reactions have continued to trail the Tuesday, February 18, 2014, visit of the Actors Guild of Nigeria (AGN) to President Goodluck Jonathan.

The latest reaction is coming from the North West Vice President, AGN, Mallam Salihu Othman Isah, who has lambasted those criticising the visit as led by Guild's president, Ibinabo Fiberesima.

Hotman, as he is well known as, said the visit to Mr. President was well intended just like other spheres of the society, whose associations or groups leadership have visited Aso Rock on courtesy calls.

He expressed this displeasure against the backdrop of vitriolic attacks by John Okafor, who is known as Mr. Ibu and Clarion Chukwura among others on the Guild's President, Ibinabo Fiberesima for leading top Nollywood practitioners to visit Mr. President recently.

Hotman observed that everything done in Nollywood is blown out of proportion, adding that the situation has been for those who were not invited for the presidential visit to cry blue murder.

"What is special with our visit to Aso Rock anyway? Other groups have visited without anyone making any fuss out of it. We have seen where the lawyers' body, architects, engineers, medical groups and associations, even NURTW (National Union of Road Transport Workers), Christian Association of Nigeria (CAN) Ja'amatu Nasril Islam (JNI) and other religious bodies have gone there and no one raised an eyebrow. So, how is the AGN different?

"And with due respect to them, Ibinabo's NEC couldn't have invited everyone for that visit. If anyone did not make the list, they shouldn't take it as disregard for their person or contribution to the industry. Maybe an oversight too, which is human. So, they should desist from any form of criticisms henceforth," Hotman pointed out.