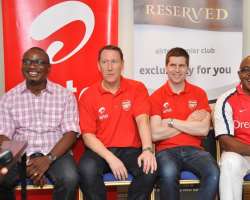 Ray Parlour, who gave this commendation during a chat with sports writers in Lagos over the weekend, said 'the U-17 Airtel Rising Stars Africa Championship has made noteworthy impact on development of youths in Africa and the discovery of football talents across the continent as well.'

According to him, 'Airtel Rising Stars has developed football in Africa and given opportunities to young boys and girls in Africa to showcase their skills, thereby discovering them at a very young age.'

The Arsenal legend, who was in Nigeria for last weekend's unveiling of Airtel Premier, noted that the company's initiative of sponsoring the U-17 Africa Championship is commendable because it will go a long way to positively impact football across Africa, particularly in the countries that participate in the tournament.

Parlour, who visited as part of the partnership between Arsenal Football Club of England and the Airtel Africa Group, joined other dignitaries who graced the unveiling of Airtel Premier Club, a highly exclusive event which took place in Eko Hotels & Suites on Sunday March 23, 2014.

Speaking further, Parlour hailed Ex-Nigerian international and former Arsenal player, Kanu Nwankwo, as one of Nigeria's living legends who has not only contributed significantly to the growth of football but to the lives of several young kids through his Heart foundation.