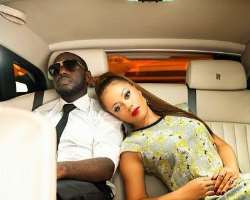 If reports making the rounds are anything to go by about Nollywood's bad boy Jim Iyke with Ghanaian actress Nadia Buhari, then there will be course for another star studded wedding celebrations just like the Okoyes.

Recently, there were speculations on the blogosphere that Jim Iyke had proposed to his Ghanaian actress Nadia Buhari, of which he Jim Iyke has not announced publicly.

But it was stated that the actor popped the question on March 20th on his talk show, 'Jim Iyke Unscripted when he presented the Ghollywood beauty with a 6-carat gold engagement ring in a London Restaurant and asked her to marry him.

For months, rumours have been rife that the pair were having an affair. However, this was greeted with denials from both actors. Even in October, there had been a report that the pair had called off the relationship.

How true is this, could it be publicity stunt? Only time will tell.