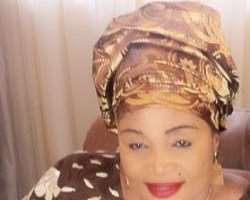 Veteran Nollywood actress and movie producer, Modupe Mariah Johnson, otherwise known as Faliwerepe, who became famous after her role in the popular Batawahala Yoruba soap opera of the late 80s and early 90s, in a recent interview spoke On how she got the name Faliwerepe. She said the name came through the famous Yoruba soap of the late 80s and early 90s titled "Bata Wahala" by Ajimajasan. She played the role of a troublesome person and people started calling her Fali-Werepe, meaning that she is troublesome.

On whether her inability to be educated in life robbed on her success in the movie industry, she replied:

“Far from it, yes I can say I still feel guilty that I didn't get a full education but let me also tell you that nothing an educated person has gotten that I have not gotten through movie. Through acting I have raised educated children and travelled all over. I have built houses and when I say houses, I won't like to say maybe it is one or two. But at least I am a landlady through my gift of acting.”

“I have travelled to several countries of the world and the last time I went to America I was even making jest of myself; I said when we were growing they used to sing that "Bata Re a dun koko-ka (2ce) to'o ba kawe re, bata re a dun koko ka" (Your shoe will make the Kokoka noise (2ce) if you read your book, your shoe will make the Koko ka noise". And I said, 'look at me, despite the fact that I didn't read my shoe is still doing ko-ko-ka . What if I now read (Laughter).”

“But the fact remains that education is the best asset you can give a child, no matter how gifted the child is, you must give education to that child, for me, maybe my rare creativity as an actress made some way for me. My peculiar nature, my peculiar creativity and all that but not withstanding, I will always advise young people especially the female child to go to school. Life changes everyday and education remains the only current that will pay your life bills.”

On the major challenges of being a veteran actress especially with the emergence of young actresses, she said, change is the only thing that will last a decade or a century and so they continue to reinvent themselves.

She said being a veteran actress does not affect her stuff as an actress but in terms of make up.

"I am above 50 and at times, when your body is aging, things you do as a young person might start eluding you. For instance, I like laying my eye lash as a young girl but now, if I try doing it the thing will just slip up and become a total mess, so what I do is that I go along with my make-up artiste anywhere I go."