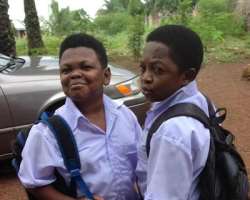 Nollywood comic act, Chinedu Ikedieze aka Aki, has been a bit silent in the movie industry for some time now only featuring in few movies.

In a recent interview, the actor debunked speculations making the rounds that there was a rift between him and his co-actor Osita Iheme aka PawPaw.

According to him, he said that Osita is a friend and a brother which he has come to admire because he is also his kind of person.

“When i first met Osita, I never saw him as a threat. He is my friend and a good actor, so I don't have issues with him and we both keep contacts.”