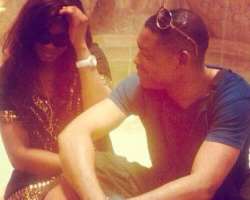 Marriages in Nollywood have always been with breakups, but that of Omosexy, as the pretty actress is fondly called, has remained stronger each day.

The couple got married on the 23rd of March 1996 at the Ikeja Registry and later held their white wedding onboard a Dash 7 Aircraft flying from Lagos to Benin, on the 21st of April 2001.

Their marriage is blessed with four children namely Princess, M.J, Meraiah and Michael.